Below is the conclusion of his essay, White Police and Black Power: The Origins of the Aboriginal Legal Service.

⫸Missed parts 1-5? Start at the beginning.

Our past guides the way to a fairer future

For many reasons, the Aboriginal Legal Service (NSW/ACT) today is not the organisation that it was originally conceived to be. That is understandable given the passage of 50 tumultuous years and the inevitable evolution of such type of organisations over that period of time.

However, two things remain important for the organisation today.

They are firstly that it should always remember its true origins and the underlying philosophy of Aboriginal community control.

The second is that as an organisation they need to play a key role in advocating greater change in a criminal justice system that the Royal Commission into Aboriginal Deaths in Custody 25 years ago found to be deeply embedded with racist attitudes toward Aboriginal people in particular, and brown people generally.

That the ALS should remember its origins should go without saying. But it is also important to remember the detail as well as the general history, because it is in the detail where we find the most interesting parts of history.

The story of the origins of the ALS in Australia is as epic and full of heroic people as any of the great stories of Australian history. It is a classic David and Goliath type struggle by a small group of politicised Aboriginal activists who were determined to upset the 1960s status quo of police and institutional brutality and violence against their community in Redfern.

From the ALS to an entire community-controlled sector

The repercussions of what this small group of Redfern activists achieved were felt nationwide as Aboriginal Legal Services based on the original Redfern model sprang up all over Australia during the subsequent decade.

Many other community organisations such as The Breakfast for Children program and Murawina Women and Children’s Centre, and the Redfern Housing Co-operative emerged as a direct result of the Redfern ALS, so that the broader historic impact of the ALS was far greater that might seem from a dry reading of just a basic history of the service.

And this is simply a history of the origins of the ALS. There are 50 more years of historic events in which the NSW ALS was a key participant, but that for now can be left to other historians of the future.

The second reason why today’s Aboriginal Legal Service might want to remember the circumstances of its origins is because of the daunting role that lies ahead.

When the ALS was created the imprisonment rates for Aboriginal people seemed to be grossly disproportionate, but we didn’t really have any facts because the changing rates of incarceration of Aboriginal and Torres Strait Islander peoples could not be systematically tracked until the advent of a national prison census in 1982.

These data revealed, for the first time, the enormous over-representation of Indigenous Australians in prison. The ratio of Indigenous to non-Indigenous imprisonment rates per head ranged from 3.3 in Tasmania to 29.0 in Victoria. As the 1980s progressed, the number of Indigenous prisoners increased.

The Commission made 339 recommendations the overwhelming majority were either immediately ignored or ultimately forgotten, the result of which we have seen a continuing increase in Aboriginal imprisonment rates nationally. 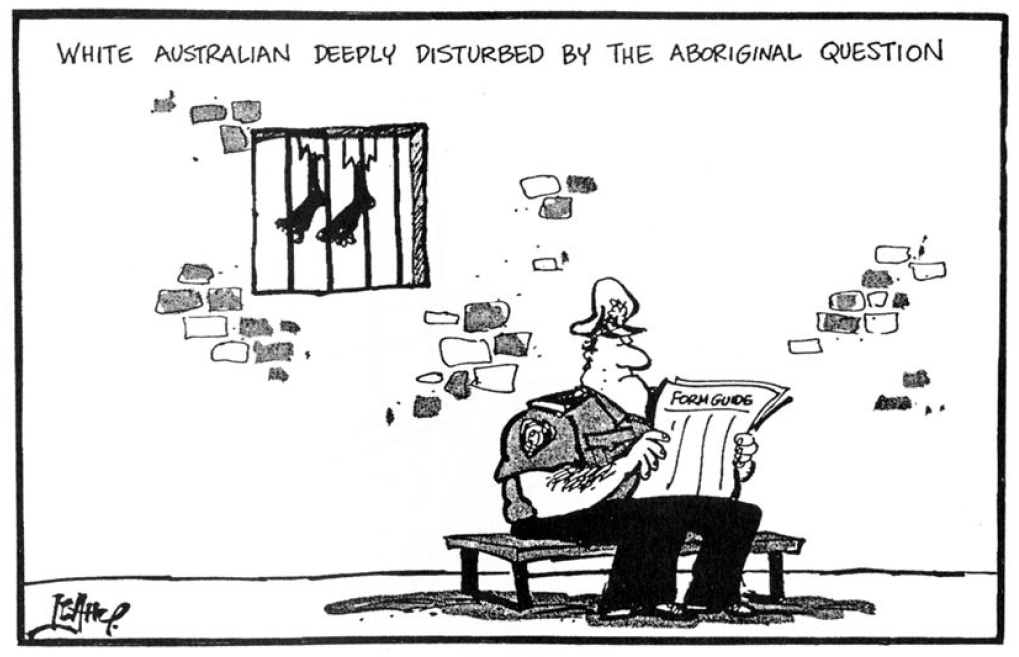 A cartoon from 'Beyond a Joke: An Anti-Bicentenary Cartoon Book' compiled by Kaz Cooke

A return to activism

These appalling statistics merely serve to highlight the importance of the work of any Aboriginal Legal Service today.

It is clear that the more passive role it has adopted in its 50-year evolution in the legal system has not achieved the type of results that underpinned the great political leap forward that occurred between 1968 and 1975.

Maybe it is time to consider a change in tactics.

One of the great ironies of history was that at the time in 1970 when the Federal Government had been forced into providing funding for the embryonic NSW Aboriginal Legal Service and the Committee was to employ their first full-time solicitor, there were no Aboriginal lawyers in Australia, so a non-Aboriginal solicitor, Alan Cameron was employed.

It also is a great irony that today, when we have dozens of Aboriginal lawyers and Aboriginal Legal Services in abundance (relatively), there are more Aboriginal people imprisoned than there have ever been.

This paradox should motivate us to work harder and maybe, like the activists of old, be firmer in seeking desperately needed reforms to a system that keeps on imprisoning our children and grandchildren.

This is the conclusion of Dr Gary Foley's essay, White Police and Black Power. Links to the previous chapters can be found below: