Below is Part 5 of his essay, White Police and Black Power: The Origins of the Aboriginal Legal Service. We will publish the remaining sections over the coming weeks.

⫸Missed parts 1-4? Start at the beginning.

The young Kooris of Redfern saw striking similarities in the American experience and their own communities.

They began to adopt and adapt the strategies and tactics they were reading and hearing about in America. Thus when Redfern activists pondered the problem of police harassment in their own community, they were drawn to consider methods adopted the Black Panther Party of America, operating in the San Francisco suburb of Oakland, California.

The American Black Panther Party for Self-Defense's early program called the 'Pig Patrol' attracted the interest of the Redfern group. In the Oakland ghetto a situation existed regarding police harassment and intimidation that seemed to the Australian young radicals to be very similar to their experience in Redfern. 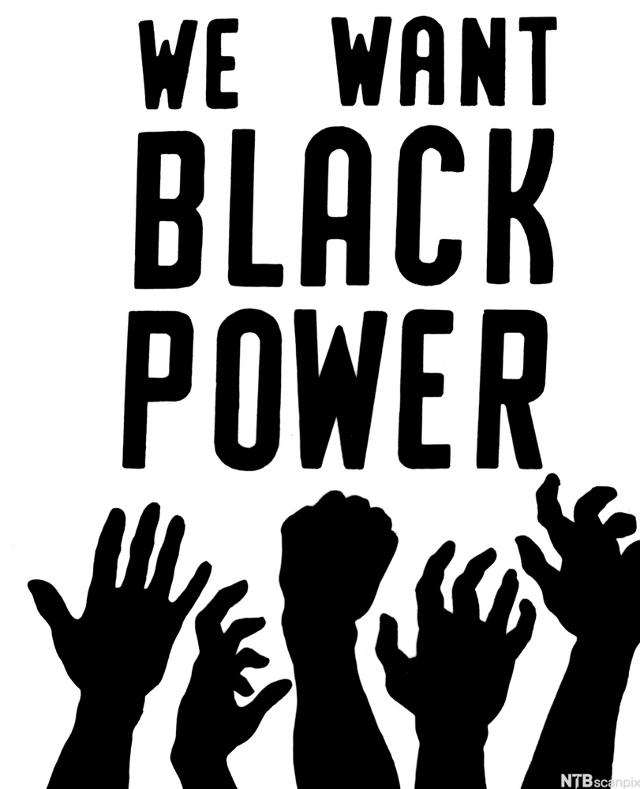 Panther leader Huey P. Newton's response to the Oakland situation had been to research California law and ascertain that it was legal for citizens to carry firearms as long as the weapons were not concealed. Armed with this legal loophole, Newton then armed the Panthers with guns and set out to 'defend the black community'.

In the US experience, this tactic of direct, armed confrontation with police resulted ultimately in the leadership of the Panthers being decimated, but this did not deter the Redfern group.

The 'pig patrol' comes to Redfern

The basic Panther idea of a group to monitor police activity seemed to the Redfern activists to be a good one.

It was felt that by monitoring and keeping a record of police harassment of the community they might be able to build a solid database of information that they might then use politically to alleviate the situation. 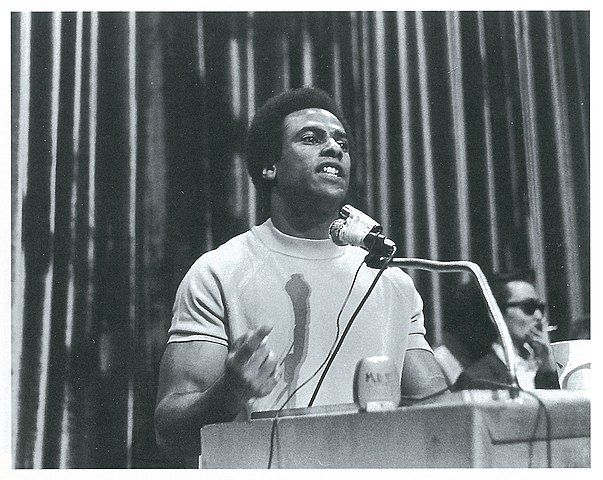 On Saturday nights in 1969, young activists including Coe, Williams, Billy and Lyn Craigie, Bob and Kaye Bellear, msyelf and others began observing and collecting information on the regular police raids against the Koori pub, the Empress Hotel in Redfern. About the same time the Redfern activists were developing and extending contacts with similar young Indigenous groups in Melbourne and Brisbane.

At the 1968 FCAATSI (Federal Council for the Advancement of Aborigines and Torres Strait Islanders) Conference in Canberra, members of the Redfern group had encountered Kath and Denis Walker and Don Brady from Brisbane, and Bruce McGuinness and Bob Maza from the Aborigines Advancement League in Melbourne.

Both the Victorian and Queenslander groups had since visited Sydney and strong friendships developed between the three groups, largely based on an almost identical political philosophy centred on Indigenous self-determination and economic independence. 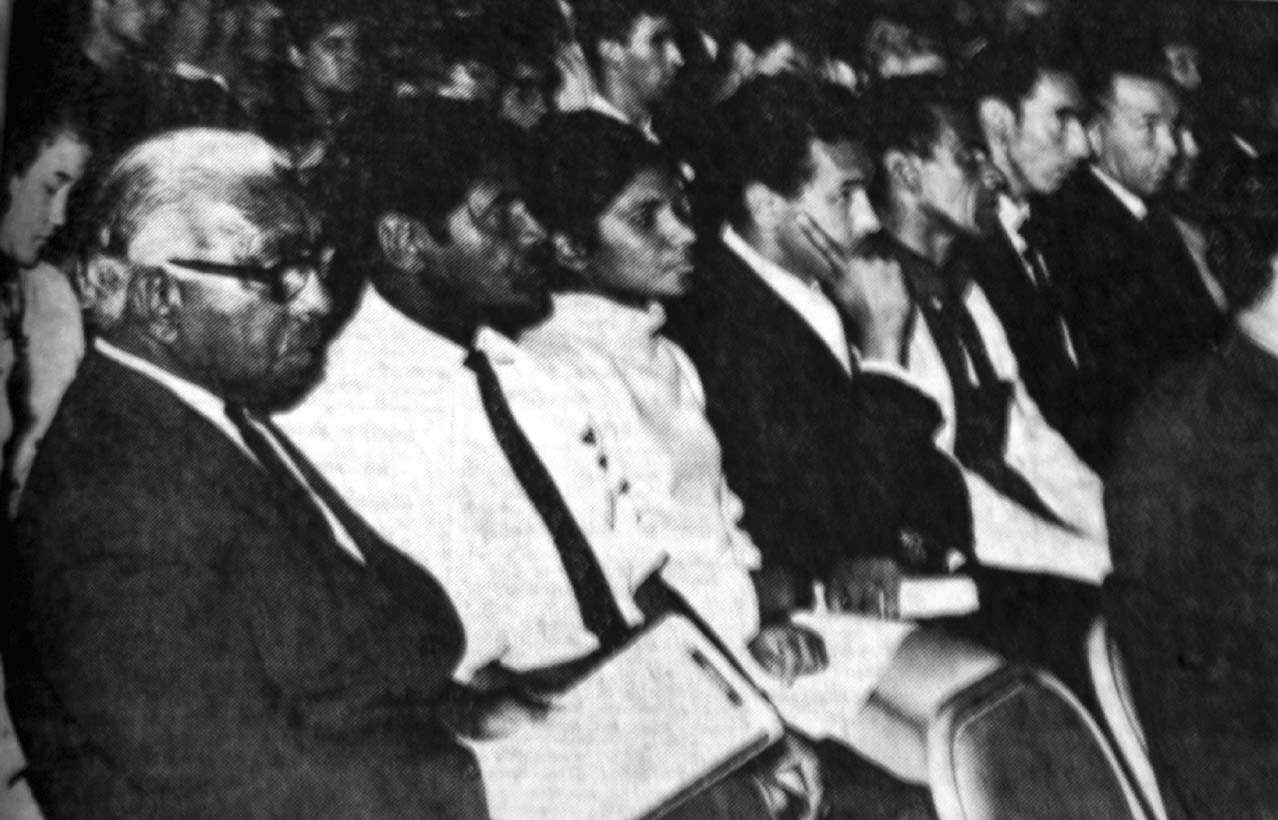 Attendees at the FCAATSI Conference in 1968. Photo courtesy of National Museum of Australia

The means by which this was to be achieved was through Land Rights and the method was direct confrontation. These were the ideas that bonded the different groups from a diverse range of historical circumstances together.

Additionally, numerous other individuals from all parts of Australia drifted to Redfern to see what was happening. Some, like Roberta Sykes and Naomi Mayers stayed and became involved, whilst others, like Colin (Black Mac) MacDonald of South Australia and Black Allen Murawulla from Western Australia, and Les Collins from Queensland came and absorbed and travelled on to pass the word.

Roberta Sykes remembered that she first met Denis Walker on Evelyn Scott's verandah in Townsville, where he told her:

Sydney's where the action will happen. There are many young Blacks working there … It's lots closer to Canberra, we have to put pressure on federal politicians to honour the referendum.

In Redfern, the activists' monitoring of the police had resulted in increased attention from the police.

The notorious NSW Police squad, the 21 Division, originally created in the 1930s as an early form of paramilitary unit to deal with the Darlinghust 'Razor Gangs' of that era, suddenly began a presence in Redfern and the level of police harassment of the community increased.

The famously corrupt Sydney detective Roger Rogerson was at this time a member of 21 Division and in a 2017 documentary, he described the task of the 21 Division as having to “clear and clean up the streets” of Sydney, a task he took to with relish when assigned to Redfern with the Division. 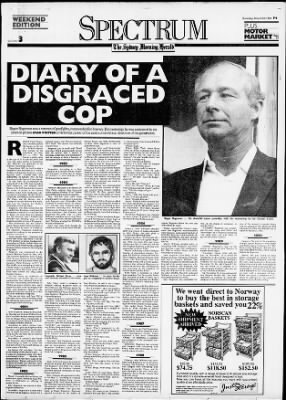 Roger Rogerson on the front page for all the wrong reasons in 1990.

Meanwhile, the NSW Police Crime Surveillance Unit had secretly compiled a dossier on the "Black Power Group" in which detailed information on key activists was combined with the records of Aboriginal bank robbers in order to accentuate the implied criminality of the group.

The document, which was distributed to all police stations in NSW, called on all districts to be alert for any of the people named in the dossier and that their presence and activities should be immediately reported to the central office of the Crime Surveillance Unit in Sydney.

Sykes said of this period:

The group of community activists who were in the process of setting up a range of services to the Black community had, of course, attracted the attention of ASIO and the police.

At this time activists in Melbourne, Adelaide and Brisbane also reported increased police surveillance and harassment, and individual responses to this more intense attention varied. In the case of Black Power leaders Bruce McGuinness and Denis Walker, the reaction was defiance.

Meanwhile, back in Redfern, within a matter of months Koori activists collected a mass of evidence of arbitrary arrests, beatings, wrongful imprisonment and other serious allegations.

As Paul Coe had in the interim began his studies in law at University of NSW, he was able to enlist the support of Professor J. H. Wootten, the respected Dean of the Law Faculty at UNSW to their cause.

This could be said to be the turning point in development of the ALS, in part because it connected the Redfern activists with eminent members of the legal profession who could not only assist in the development of a uniquely Aboriginal designed, shop-front legal aid centre, but who also provided a thin veneer of protection from the police harassment so prevalent at the time.

With the support and assistance of Professor Wootten, the Redfern group set about to try and replicate the idea of shop-front legal aid centre in Redfern. Early white lawyer recruits Eddie Newman and Peter Tobin assisted in the recruitment of solicitors and barristers willing to do volunteer work once a month or fortnight.

John Russell and people from South Sydney Community Aid helped to locate and secure a vacant shop in Regent Street in the heart of the Black community. A community working bee transformed the shop into a law office and early in 1970, Australia's first free, shop-front, legal aid centre opened its doors for business. 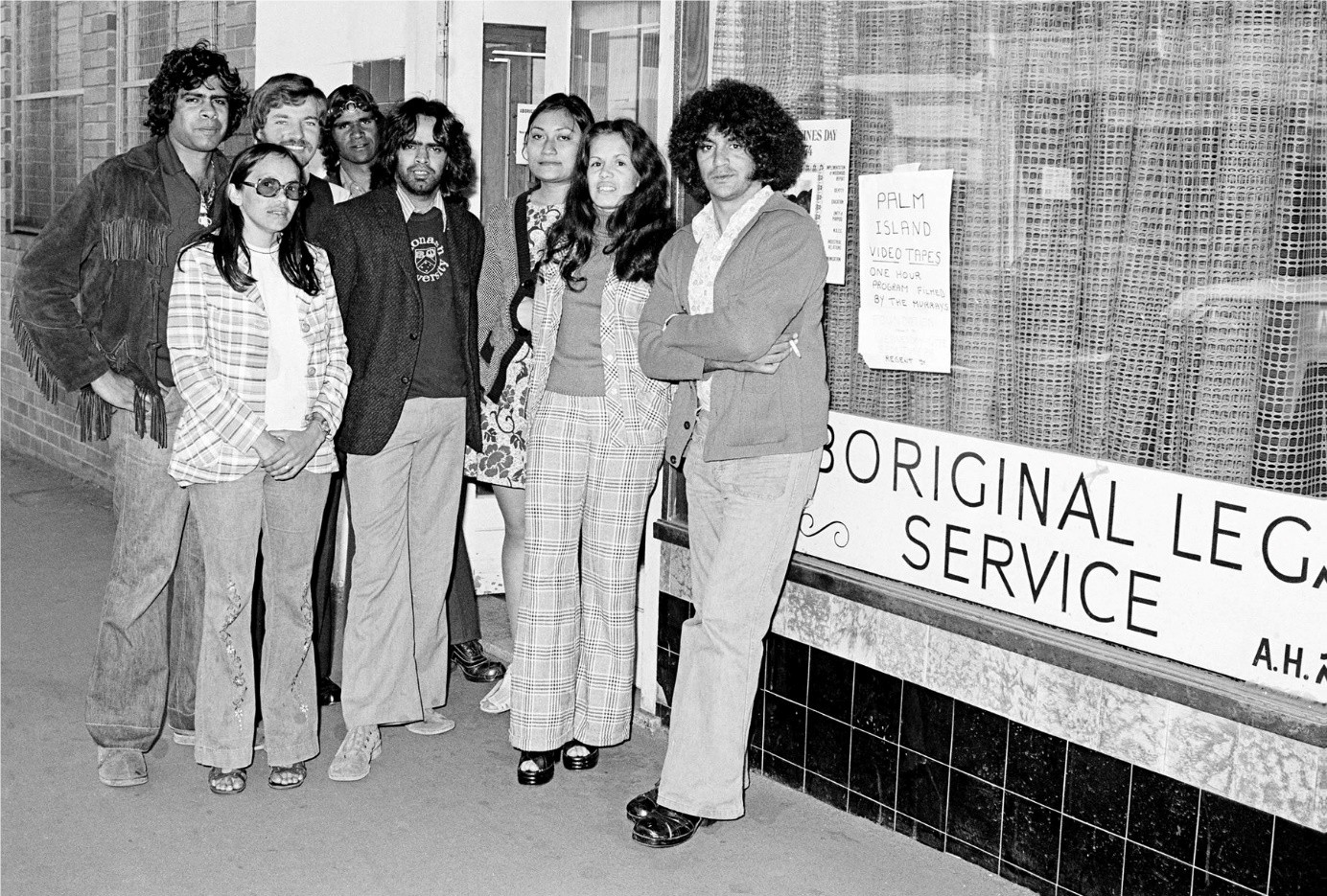 The team standing at the ALS Redfern shop-front in 1974. Photo courtesy of the National Archives of Australia.

On 29 December 1970, the Minister for Aboriginal Affairs, Mr. William Wentworth, announced a $20,000 grant (and thereby formal Commonwealth recognition) for the Redfern Aboriginal Legal Service, which he described as the "first of its kind in Australia".

The establishment of the Redfern ALS was to create a resurgence of pan-Aboriginal nationalism as a surge of confidence swept through the Aboriginal community in Sydney. For the first time, Aboriginal people were being represented in Sydney courts and were defending charges brought against them by police.