A coronial inquest heard evidence about Mootijah’s untimely death in early April 2022. The Coroner will deliver findings at a later date.

Mootijah leaves behind a large and loving family. Here is an excerpt from the family impact statement that Mootijah’s cousin, Ruby Dykes, shared at the inquest. 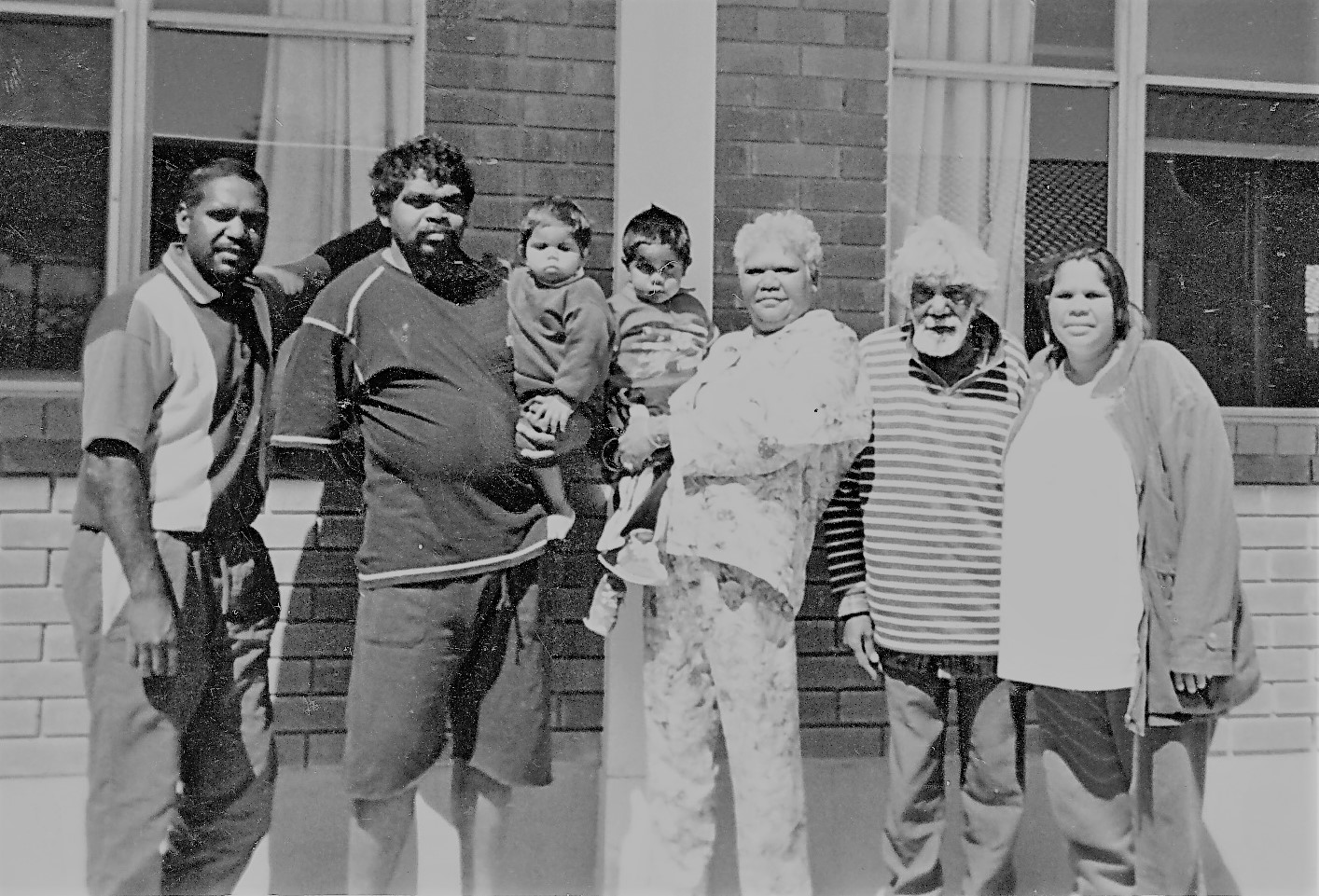 Mootijah (left) with his family.

Our families, the Shillingsworth, Hart, Eulo, Coffey and Smith families of Brewarrina, Bourke, Enngonia and Weilmoringle realise that we will never get full justice for our beloved brother, uncle, father, nephew, son and cousin, Douglas Mootijah Shillingsworth. From here on, I will refer to Douglas by his tribal name which is “Mootijah” meaning “strong one” – a warrior in Murrawarri language.

Although there will be no justice, we sincerely hope that his death in custody will bring about change. His death has left his family devastated to the core. We are searching our souls for why and how a simple ear infection could take Mootijah away from us. Otitis media is a common health issue in many Aboriginal communities across this vast continent. It can be and normally would be treated with antibiotic medication, antibiotic eardrops and pain relief tablets. Instead, while in custody, Mootijah’s ear infection went untreated to the point it caused an abscess on his brain.

Mootijah’s death has left a devastating impact on our families and leaves us in a state of anguish, disbelief and heartbreak. So many questions haunt us when we think of Mootijah; when we see his totem (moiety), when we see, listen or tell stories about Mootijah, and hear his song on the breeze.

Mootijah was a very quiet man, he was very shy but there always was a smile or a slight grin on his face. He loved having a yarn up if he felt comfortable with you. If Mootijah chose to hang out with you then that was a special privilege. If you showed him love and affection, he returned it tenfold.

His personality was that of his mum, Aunty Margy, who was small of stature, very softly spoken and spoke only if she was comfortable around you. Mootijah's physical attributes were that of his dad, Uncle Donny, who was tall and of big build and could be loud and boisterous at times. He had smiling eyes and a very soft laugh.

I know that during Mootijah’s many stopovers at Dodge City with our families, my Mum and Dad called him Muginj man. Muginj means “woman” in Murrawarri, so I take it that he was referred to as a ladies’ man, maybe because of his smile and his good looks.

When I think of Mootijah, I smell Bryl hair cream and picture a little black comb he used to pull out of his back pocket or jacket.

His dad, Uncle Donny was the same, as was his Uncle Murphy who was his dad's baby brother. Even though they all ended up going bald on top, they shared that same trait.

Mootijah held his aunties in very high esteem. He adored his elders and placed them on a pedestal. He said nothing should happen to our old people for they are our universities, meaning that they are our teachers, our educators.

He continued Weilmeringle cultural practices and family cultural traditions like hunting wild animals to cook up for family gatherings and celebrations. Mootijah especially loved fishing in the rivers and catching booglies (crayfish) in the billabongs and waterholes with his families.

Sometime during his journey through life, Douglas met and fell in love with Jodie Cubby. They went on to have two children. The first was a girl they named Klara Kate after his grandmother Klara Hart and his other mumma Aunty Katie Eulo. After Klara Kate came his son Douglas Junior.

Klara Kate and Douglas were taken away from him. They were reared up in foster care in the Northern Territory. This was the most painful part of Mootijah’s life. He craved and pined to be with his two children. This left him a very lonely man, heartbroken and deserted. But being the strong warrior he was, he overcame this. Even though it hurt him as much as losing his parents and eldest brother and his one and only sister, life prevailed and he soldiered on.

Then a couple of years later he met Annette Scott. They had a very brief relationship and along came his second daughter Hayla. Mootijah loved his children very much.

Mootijah is now re-united with his mum Aunty Margy, dad Uncle Donny, big sister Madonna Irene, and big brother Donald (known as Tacka) and all his extended families who have passed before him.

Douglas Mootijah Shillingsworth, your life isn't measured by the years you have lived, it's measured by the love you gave and the little things you did. To live in the hearts of people who loved you is never to die.

Because deep down those whose lives you have touched during your journey through life will each have their own special memories of you. Maybe something you said, the way you looked at them. The tone of your voice, the memories you may have shared or the yarns you told or made up. The songs you liked to listen to, the photos they may have with you in them. You will be remembered, Brother, in more ways than one.

May you rest in peace our Brother Douglas Mootijah Shillingsworth, for you are loved, sadly missed and forever walking the corridors of our heart and minds. Gone but not forgotten.