WHERE: The Australian Hall, 150 Elizabeth Street, Sydney. This historic venue was the site of Day of Mourning protests on 26 January 1938. It is operated by the Metropolitan Local Aboriginal Land Council.

WHAT: Opening of the Aboriginal Legal Service 50th Anniversary Exhibition, generously supported by the City of Sydney

DETAILS: Mark Davies (Chair), Karly Warner (CEO) and prominent figures from the ALS’ history will speak at an exhibition opening (open to invited attendees and media only). There may be an opportunity for media to ask questions after the formal proceedings.

The Aboriginal Legal Service NSW/ACT is celebrating over 50 years of free, community-controlled legal services with a retrospective photo exhibition.

When the ALS opened its doors in Redfern in 1970, it was the first Aboriginal legal centre in Australia as well as the only free legal service of any kind.

“It is an incredible achievement for our communities to have pioneered this movement for justice and still be going strong over 50 years later,” said Mark Davies, ALS Chair.

“While there is still much work to do, we have half a century of history to acknowledge and celebrate. We can’t wait to share this event with community.”

Visitors to the Aboriginal Legal Service 50th Anniversary Exhibition will be taken on a visual journey beginning with the first ALS shopfront. Its opening was the culmination of campaigning from a group of staunch, young activists who rose up against police brutality and harassment in Redfern.

“During this time, our people were blatantly targeted, arrested and charged with nonsense offences like public drunkenness, offensive behaviour and offensive language,” Mr Davies said.

“The ever-present threat of these charges along with a nightly curfew were designed to keep us under the thumb of the police and the state.”

A group of Aboriginal activists including Paul and Isabel Coe, Gary Foley, Billy and Lyn Craigie, Gary Williams, Bronwyn Penrith, Tony Coorey, and James Wedge began monitoring and recording everyday experiences of police brutality and harassment. They approached white lawyers, trade union groups and university students who had no idea about the scale of discrimination nor the notorious curfew imposed on Aboriginal people in Redfern.

Their actions were the beginning of a movement for self-determination in legal representation, and an important chapter in the Aboriginal resistance that had started from the very first days of colonisation.

“Our hunger for justice has only grown stronger through the years. We continue to build on the legacy of our Elders and pursue that same goal of equitable treatment for Aboriginal peoples and communities,” said Karly Warner, ALS CEO.

Nowadays, the ALS has 24 offices across NSW and the ACT, providing free services in criminal law, family law, children’s care and protection, and tenancy advice. The organisation is also involved in representing Aboriginal people in the Disability Royal Commission and advocating for justice reinvestment policies, notably with the Maranguka Project in Bourke.

The Aboriginal Legal Service 50th Anniversary Exhibition runs 16-23 April at The Australian Hall, 150 Elizabeth Street, Sydney. Tickets are free but must be booked ahead for COVID safety. Register at www.alsnswact.org.au/exhibit.

You are welcome to publish the following image with attribution to Elaine Pelot Syron: 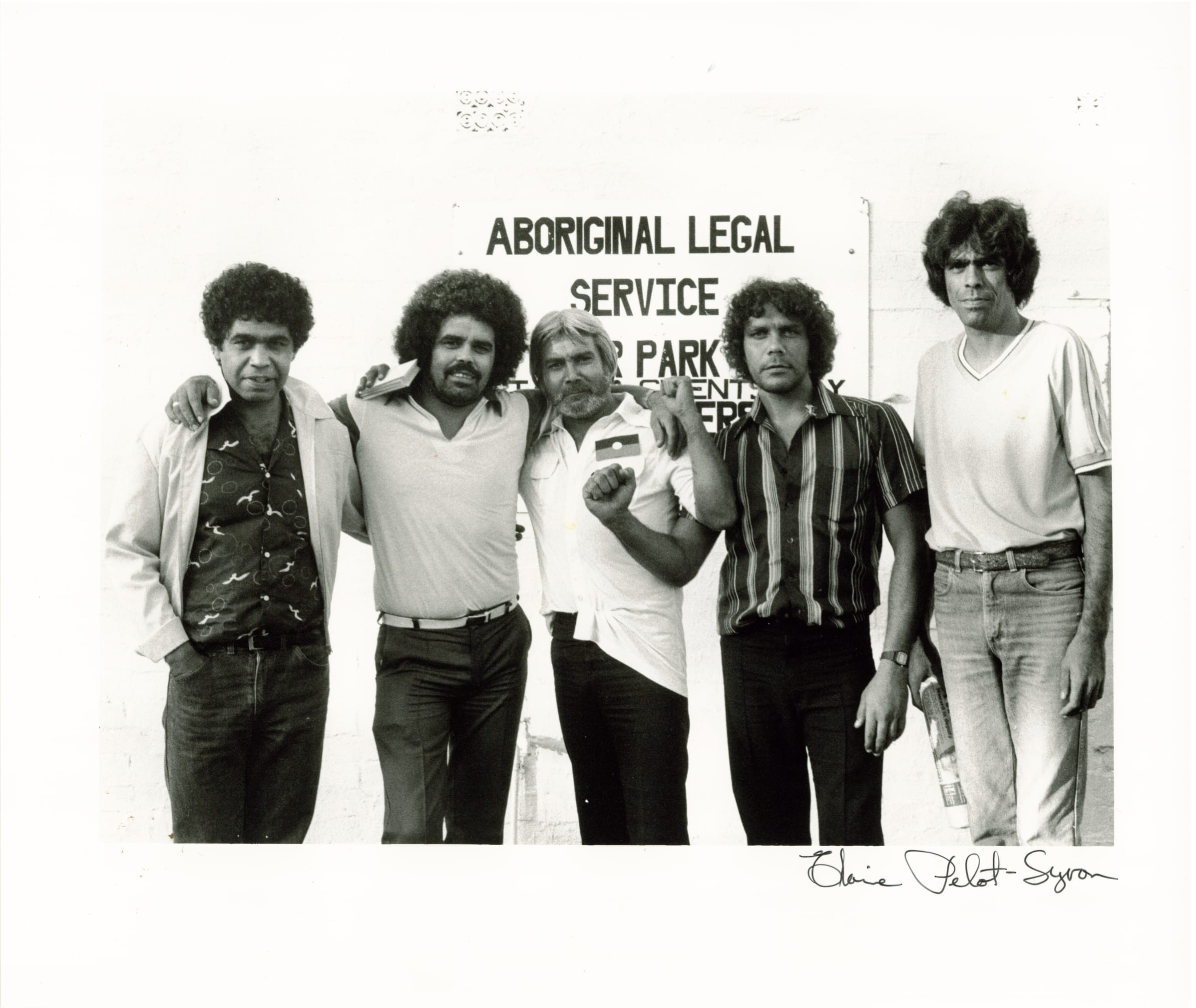